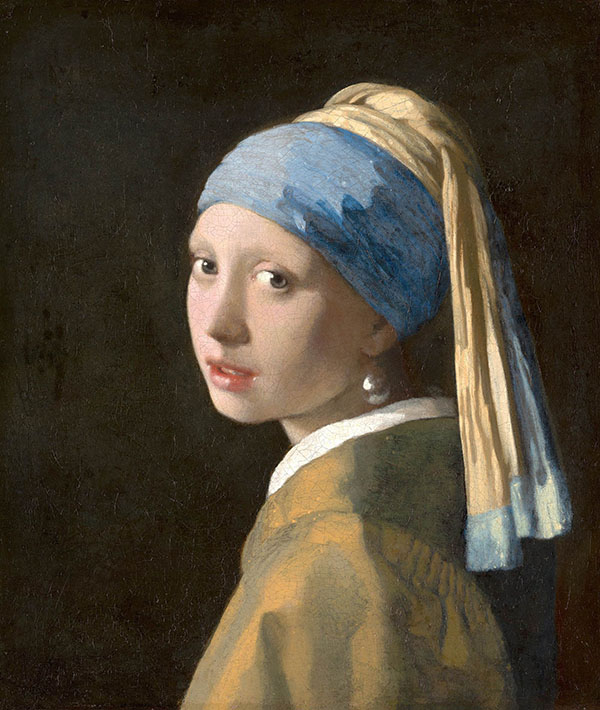 Johannes Vermeer Girl with a Pearl Earring (1665) is the artist’s most famous and captivating portrait painting. The stunning beauty, intimate gaze, and delicate treatment of Vermeer’s subject have secured its position as a canon of Western art.

Unlike Da Vinci’s Mona Lisa portrait, the work is a “troni.” It is a head study rather than a stand-alone portrait. Such works represent a character or type rather than an exact likeness of the sitter.  Rembrandt popularised the technique in around 1630, and such paintings are a cornerstone of Dutch Golden Age art.

In this oil painting on canvas, the Dutch artist Jan Vermeer depicts a European female wearing a turban and, of course, a pearl earring. The sitter is composed with incredible softness, and her face is eerily lifelike. Invisible brushstrokes and gradual transitions of shade and tone replace precisely rendered details, reflecting our “natural” mode of observation.

The Girl with a Pearl Earring reveals that the painting of the clothing is livelier in contrast, with more expressive brushstrokes and dots of paint.

The white collar is impasto (i.e., built-up with heavy layers of paint). In opposition, the turban has drier brushstrokes, probably due to the use of the blue pigment “ultramarine,” which was incredibly precious and expensive at the time.

The Girl with a Pearl Earring Analysis

One of the most frequent questions about a Girl with a Pearl Earring is, "what does it mean"? The symbolism behind Vermeer’s famous painting is a topic of intense scrutiny and debate. The young woman slightly parts her lips as if she is about to speak. But instead, she directly meets the viewer’s gaze and is not occupied with other activities or chores.

Consequently, scholars believe the pearl is integral to the meaning of the painting, perhaps suggesting a romantic theme. Combined with the girl’s exotic turban (wound from two pieces of material), this adds a layer of intrigue to the painting. Of course, Dutch women would not have worn such an outfit, resulting in further questions regarding the sitter’s identity.

Vermeer's art demonstrates a true mastery of light and shade, exemplified by the masterful and deft presentation of the “pearl,” which has just two brushstrokes.

What is the history of Vermeer's portrait painting?

Adding to legends surrounding the work, it was only “discovered” in 1881. This fortuitous event occurred at the Venduehuis der Notarissen in the Hague. At the auction house, a mysterious work of art was too dirty for proper identification. The Vermeer attribution only came after subsequent cleaning revealed the signature.

Pearls symbolize wisdom and purity in art, as well as exoticism and feminine beauty. Prized for their rarity and natural beauty, they have adorned Kings, Queens, and courtiers throughout the ages.

Despite its name, recent scholars have argued (based on reflections and the extraordinarily large pear shape) that the earring could be polished tin. However, the pearl is too large to be real and is, in all likelihood, an imitation jewel.

Undoubtedly the most famous Vermeer painting, Girl with a Pearl Earring, is one of our most famous paintings replicas.

Discover the beauty of oil painting reproductions by Johannes Vermeer and other Dutch Golden Age artists. 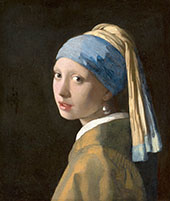 Vermeer Girl with a Pearl Earring c1655
By Johannes Vermeer