All Artists
G
GAUGUIN, Paul
When Will You Marry? Nafea Faa Ipoipo 1892 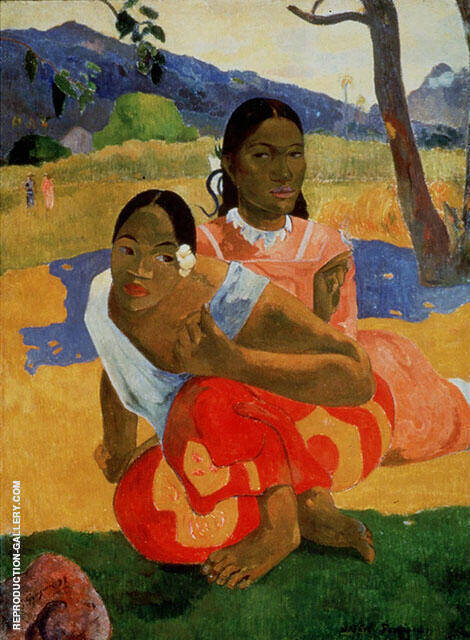 Paul Gauguin When Will You Marry is an oil painting by one of the greatest French post-impressionist artists.

Translated in French as “Quand te Maries-Tu?” and Tahitian as “Nafea faa Ipoipo” it is an oil on canvas painting measuring 101 by 77 centimeters.

Where is Nafea Faa Ipoipo located?

Nafea Faa Ipoipo is one of the Paul Gauguin Tahiti paintings. The artist traveled to this beautiful island (the largest in French Polynesia) in 1891.

He made the trip while facing financial difficulties due to the unpopularity of his art and becoming estranged from his wife.

In his own words, he hoped to find an “Edenic paradise” to create pure “primitive art”. But, instead, Gauguin considered many of his fellow French primitive painters “pretenders” – falsely representing cultures and landscapes they’d never actually experienced.

Despite this, Tahiti wasn’t the untouched paradise Gauguin imagined. On the contrary, many of the country’s native inhabitants contracted diseases from European visitors and settlers. Infection resulted in the loss of the Islander's primitive and unique culture.

For this reason, Gauguin’s portraits present a mixture of Tahitian women as nude, clothed in traditional Tahitian garb and Western dresses. In When Will You Marry, the lady at the front appears in traditional clothes. The woman behind her wears a European-style dress, as do the two smaller figures in the background.

Owned by a private family, the painting has changed hands frequently over the years.

The family of Rudolf Staechelin sold the painting in February 2015 for a staggering $210 million US dollars.

What does Gauguin’s When Will You Marry represent?

The painting’s title indicates a woman on the brink of marriage. The white “tiare” flower behind her ear furthers this narrative, alongside connotations of chastity and innocence.

The woman in the foreground settles on the boundary between the front and middle ground of the painting. In life, she teeters on the edge of girlhood and marriage.

The woman behind (wearing a high-necked Western dress) sits upright. This posture references those seen in Buddhist art and figurines. Amidst the stillness, however, she raises her hand. This gesture is a mudra of threat or warning, providing a sinister overtone to the painting.

Like other famous Gauguin paintings, the artist stylizes and simplifies his sitter’s features. He also inscribed the title on the bottom right of the canvas. Fascinated by the Tahitian language, short words and phrases appear in several Gauguin artworks.

Why is When Will You Marry so expensive?

The painting won little to no acclaim during Gauguin’s lifetime. On returning to France, Gauguin launched an exhibition in 1893.

This “Durand-Ruel” exhibition generated a small number of positive reviews but few sales. Gauguin put a price of 1,500 francs on When Will You Marry at the exhibition, but no buyers came forward.

Because of this, the painting’s record sale price in 2015 was a relative shock. At this point, the art market was extremely buoyant. The painting itself also explains the high price. It’s a beautiful representation of French post-impressionist art by one of the true experts in color and composition.

Another artwork, Paul Gauguin’s Where Do We Come From, had a similar rise to prominence. Sold for just 2,500 French francs in 1901, it passed hands several times during the 1910s and 1920s.

Later purchased by the Marie Harriman Gallery in New York (1936), it enjoyed a surge in popularity alongside other Paul Gauguin art.

When Will You Marry? Nafea Faa Ipoipo 1892
By Paul Gauguin