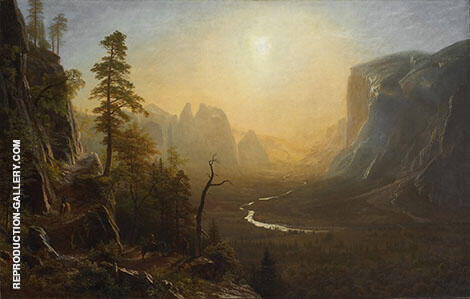 When was Albert Bierstadt born?

Albert Bierstadt was born in Germany in 1830.  His parents moved to Massachusetts when he was a child and raised him in New Bedford.

What type of artist was Albert Bierstadt?

He enjoyed art when he was young, but in his early 20's, he started experimenting with oil paintings.
Bierstadt is a prominent member of the Group of Seven art movement with fellow artists Thomas Cole and Thomas Moran.

This group of artists focused on capturing the landscapes of the Hudson River Vallery and the Catskill and Adirondack Mountains.
Bierstadt's landscape oil paintings are shaped by the Romanticism art movement and feature extravagant and sweeping panoramic scenes of the American West.

How many paintings did Albert Bierstadt paint?

It is unknown exactly how many landscape paintings he completed, but estimates range they number from 500 to 4,000.

Famous landscape oil paintings by Bierstadt include Valley of the Yosemite 1864. This painting is held by the Museum of Fine Arts, Boston.
It is unusual in that it is a smaller-sized painting.    However, it demonstrates the use of Luminism, a technique adopted by many Group of Seven artists, which emphasizes the effect of light upon the landscape.

Storm in the Rocky Mountains, Mount Rosalie 1866, is located at the Brooklyn Museum.  This painting is representative of the immense landscape paintings generally created by Bierstadt, with a size of 2.11 x 3.62 meters.

Among the Sierra Nevada Mountains, California is another vast oil painting on canvas (72 x 120") owned by the Smithsonian Art Museum in Washington.

Why is Albert Bierstadt important?

Albert Bierstadt is the foremost 19th Century landscape artist of the American West.
His oil paintings celebrate the spectacular scenery of American landscapes and the most critical period of exploration and discovery.

Albert Bierstadt oil paintings reproductions and many other Group of Seven artists are available from our online art catalog.