All Artists
R
RUBENS, Peter Paul
The Triumph of Victory 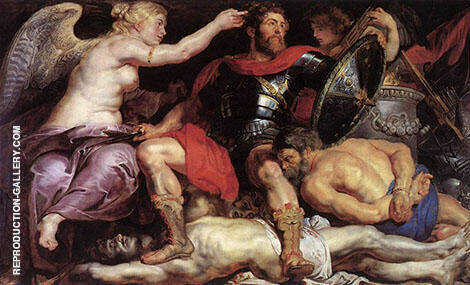 What Nationality Was Peter Paul Rubens?

Peter Paul Rubens was a Flemish artist born in June 1577 in Siegen, Germany. Rubens father Jan Rubens was a member of a well-established merchant family from Antwerp, and was a lawyer.

Jan Rubens and his wife Maria left Antwerp and went to Cologne to escape persecution as Jan Rubens was a Protestant. Jan Rubens became the lawyer to Anna of Saxony, the second wife of William, Prince of Orange, in her court in Siegen, but was imprisoned following an affair with Anna. On his release from prison the Rubens returned to Cologne. Peter Paul Rubens was baptized a Catholic in Cologne, and raised as a Catholic by his mother, herself a Catholic. Rubens and his mother returned to live in Antwerp following the death of Jan Rubens.

Where Did Peter Paul Rubens Live?

As a young man Peter Paul Rubens was brought up in Antwerp, where he received a classical education studying Latin and classical literature. At fourteen years old he began a series of artistic apprenticeships, studying with two of Antwerp’s leading painters of the time, Adam van Noort and Otto van Veen. As was very typical of the time, the training that Peter Paul Rubens received involved copying the work of earlier artists, notably Hans Holbein the Younger. Rubens finished his education in 1598, at the age of twenty one, and joined the Guild of St. Luke as an independent artist.

In 1600, Peter Paul Rubens went to Italy, to further his education and seek employment. He stopped first in Venice where he saw old master paintings by Titian and Tintoretto. He went then to Mantua, settling at the court of the Duke of Mantua, who financed his travels to Rome and Florence. There he studied paintings by Michelangelo, Raphael and Leonardo da Vinci, who were instrumental in influencing the style and use of color that Rubens came to use in his own works. He also saw works by Caravaggio, in the new Baroque style, which influenced him.

Here in Rome Rubens received his first major commission for a series of three paintings for the chapel of St. Helena, in the Basilica of Santa Croce, the first of many Peter Paul Rubens paintings.

In 1603, the Duke of Mantua sent Rubens to Spain on a diplomatic assignment to deliver a shipment of paintings to King Philip III, who was a notable collector of artworks. While in Spain, Rubens was able to study the many works of Titian and Raphael that were in the King’s collection. Rubens also painted an equestrian portrait of the Duke of Lerma, King Philip’s prime minister.

On his return to Italy in 1604, Rubens stayed firstly in Mantua but then moved to Genoa and Rome. He painted many portraits which later influenced the style of famous Baroque paintings by Anthony van Dyke, as well as the English portrait artists Joshua Reynolds and Thomas Gainsborough.

When Rubens heard that his beloved mother was seriously ill, he left Italy and in 1608 returned to Antwerp to be with her, but she died soon after his arrival.

In 1609, he was appointed Court painter to the Archduke of Austria and the Infanta Isabella of Spain, and was permitted to live in Antwerp to paint and have his studio, rather than at the court itself, which was in Brussels.

Rubens remained in Antwerp for most of the remainder of his life, and it was in his studio there that he painted many of his religious oil paintings on canvas.

In 1610 and 1611 Rubens painted The Raising of the Cross and The Descent from the Cross, for the Cathedral of Our lady, in Antwerp.

The Conversion of Saint Paul was a one of a series of religious oil on canvas paintings by Rubens, painted in the 1620’s in Antwerp, for the King of Poland, Wladyslaw Vasa. It was bought by the French Montesquieu family in 1673, and stayed in France for nearly one hundred years before being purchased by the Gemäldegalerie in Berlin, in 1903. The painting was moved during World War II, but is believed to have been lost or destroyed in mid-1945.

The Entombment is held by the Getty Museum in Los Angeles, CA. The painting is described by the Getty as being the depiction by Rubens of the moment after the Crucifixion and before the Resurrection when the body of Christ is placed in the tomb. The Entombment is believed to have been painted by Rubens as a commission for the altarpiece of a small chapel, where the Eucharist, or Holy Communion, would have been given.

Early in his career, Rubens was commissioned to paint the famous Samson and Delilah, by the Lord Mayor of Antwerp, for his own home. The completed painting is held by the National Gallery in London. As was customary, Rubens firstly made an ink sketch of his intended work, and this sketch is held by a private collection in Amsterdam. After the sketch, Rubens made an oil sketch on a wood panel, and this is held by the Cincinnati Art Museum, in Ohio.

In 1635, now back from his various diplomatic missions in the courts of Spain and England, Rubens painted The Three Graces, one of his masterpieces. The painting now hangs in the Prado Museum in Madrid. This painting exemplifies the term “Rubenesque”, his depiction of full-figured women in his works, and Peter Paul Rubens art, especially in his biblical and mythological paintings.

It is believed that the inspiration for these Rubenesque female figures came from Rubens marriage to a sixteen year old Helene Fourment, the nice of his first wife Isabella Brant, who had died four years previously.

Rubens purchased an estate outside Antwerp in 1935, the Chateau de Steen, and spent his remaining years there, often painting landscapes for his own pleasure, rather than for any commercial benefit. These landscapes were much admired later by other landscape artists such as John Constable, the famous English landscape painter.

Rubens died from heart failure in 1640, and was buried in a chapel in Saint James’ Church in Antwerp.

The Triumph of Victory
By Peter Paul Rubens