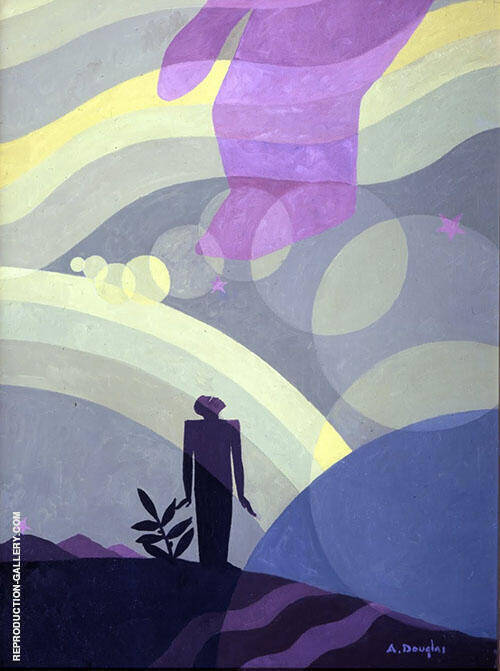 Aaron Douglas was a 20th century African-American artist.
He was born in Kansas in 1899 and died in Nashville in 1979.

Douglas was educated in Topeka and in 1918 graduated from the University of Nebraska with an Arts Degree.

Upon moving to Michigan, he took evening classes at the Detroit Museum of Art.
His ambition was to study further in Paris.

However, in 1927 he settled in Harlem where he worked painting and illustrating periodicals which highlighted African-American injustices.
In his later years, Aaron Douglas moved to Tennessee where he established the Art Department at Fisk University.

What is Aaron Douglas Famous For?

Douglas is one of several famous African-American artists who is known not only for his oil paintings, but also for his murals which focus on race, segregation and black social issues of the time.

He was a prominent early 20th Century artist who is recognized as a preeminent leader of the Africa-American art movement.

Songs of the Towers was painted in 1934 and a section of a four-part mural collection celebrating the rise of the Harlem Renaissance.

Let my People Go was acquired by the Metropolitan Museum.

Why was Aaron Douglas important to the Harlem Renaissance?

As a founder of the Harlem Renaissance art movement his work and teachings inspired a new generation of young African Americans to become involved in the arts.

Aaron Douglas taught extensively in America, spreading the word and encouraging other black art students in their careers

What painting made Aaron Douglas famous?

He is best known for his silhouette paintings, of which Aspiration 1936, held by the de Young Museum in San Francisco, is his most famous.

The Creation 1935
By Aaron Douglas