All Artists
B
BRONZINO, Agnolo
Venus Cupid and Envy 1548 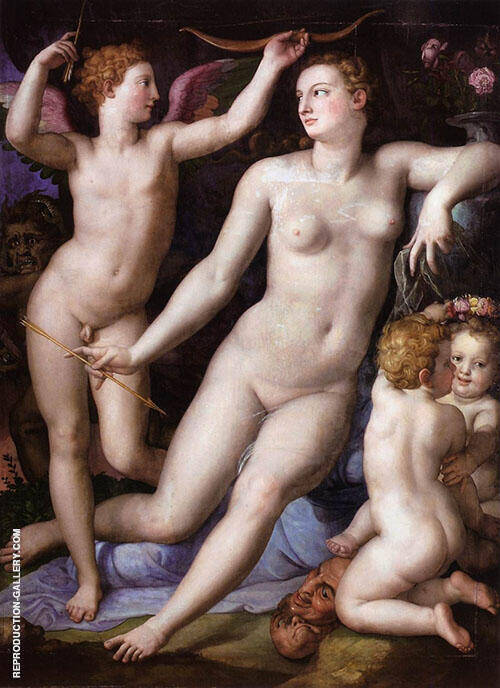 As the creator of some of the most beautiful and famous Renaissance paintings, Agnolo Bronzino was an undisputed master of the Italian Renaissance.

But who exactly was this pioneering artist, and what are some of the best-known Bronzino paintings? This brief introduction presents Bronzino’s fascinating life, work, and times.

Where is Agnolo Bronzino from?

Born on 17 November 1503, Agnolo di Cosimo (Bronzino) hails from the Italian city of Florence. He spent almost all his working life in the city as a leading Florentine painter.

Indeed, from his late thirties onwards, Bronzino worked almost exclusively for the Grand Duke of Tuscany (Cosimo I de’ Medici) as a court painter. This took up most of his professional time.

Bronzino mainly worked on Renaissance portraits. These often consisted of portraits of the Medicis, used as diplomatic gifts by the family. Bronzino was an early pioneer of replica art and famous painting reproductions. He often ordered multiple copies of these portraits (replicated by apprentice artists) for the family to send out.

Despite this portraiture work, Bronzino created several religious paintings and allegorical topics. One of Bronzino’s best-known works is Venus, Cupid, Folly, and Time. Now held by the National Gallery in London, this painting depicts strong sexuality veiled by classical mythology.

Who did Bronzino study under?

Bronzino studied with Jacopo Carucci (known simply as Pontormo), an Italian Mannerist portraitist from the Florentine School. His work showed a significant shift away from the calmly controlled works of the early Florentine Renaissance. Instead, Pontormo’s painting used ambiguous perspectives with characters floating in uncertain space.

Bronzino’s painting heavily borrowed from Pontormo’s teaching. Despite this, Bronzino returned a feeling of calm control to his stylish, elongated figures. Unlike his teacher, they rarely display any form of tension or dramatic emotion.

Scholars believe Pontormo included a portrait of a young fourteen-year-old Bronzino in his Joseph in Egypt painting. In it, Bronzino appears as a child seated on a step. In adult life, the two men kept a close working relationship, often collaborating on artwork. Indeed, their styles were so similar that scholars still debate specific attributions to this day.

Mannerism was a sixteenth-century art movement characterized by elegant figures and purposeful distortions. It applies to artists inspired by Raphael and Michelangelo, working between 1520 and 1600.

This careful staging appears in Bronzino paintings such as Saint Sebastian (1533) and St John the Baptist (1553). Both feature significantly elongated limbs and torsos. These sensual male nude portraits also led some scholars to guess about Bronzino’s sexuality.

What was Bronzino known for?

Bronzino is primarily known for his paintings of the Medici family. Amongst famous renaissance paintings, however, his 1544 Portrait of Eleonora di Toledo col figlio Giovanni (the wife of Cosimo Medici) particularly shines.

In this painting, the woman’s sumptuous dress is an expert depiction of fabric and form. Indeed, it takes up as much room as the two sitters (placed against a sapphire-blue background). The young boy in the portrait was Eleonora’s second son, who sadly died from malaria in 1562.

The Medici patronage started in 1539, and Bronzino created many elegant and assured portraits of the family. Replicated in many workshops and copies, Bronzino painted Cosimo and Eleonora (as well as children and friends) with minute diligence. His celebrated portraits include works such as Portrait of Bia de Medici and Portrait of Cosimo I de Medici in Armor (both painted in 1545).

In addition to portraiture, Bronzino also created several religious paintings. From 1540 onwards, he worked on frescos for the Chapel of Eleonora di Toledo, found in the Medici family’s Palazzo Vecchio in central Florence.

These religious artworks are some of Bronzino’s finest works, with the holy family sensitively represented in the Madonna Panciatichi and Holy Family with St Anne and The Infant St John.

Later in life, Bronzino also helped found the “Accademia delle Arti del Disegno” in Florence. Cosimo I de' Medici provided finance as an academy of artists, with further help from Giorgio Vasari. Bronzino was an active member, taking part in the Academy and supervising artistic production all over Tuscany. While most members were male, Artemisia Gentileschi was the first female artist admitted.

Bronzino’s teaching at the Academy favored a gifted young artist named Alessandro Allori. Due to their friendship, Bronzino was often known as Allori’s “uncle.” They certainly enjoyed a close working and personal relationship, and Bronzino lived at the Allori household for some time.

There’s scarce evidence regarding Bronzino’s unusual nickname. Many art historians guess it referred to his reddish hair and dark skin.

The Uffizi Gallery in Florence (specialists in Bronzino art) suggest it derives from the dark skin tones of his sitters. Examples include portraits such as Andrea Doria as Neptune (1550) and the somewhat gloomy portrait of Ugolino Martelli (1537).

Where is Bronzino Buried?

Bronzino was staying with the Allori family at the time of his death in 1572. The cause of death is uncertain, but he rests at the Church of San Cristoforo degli Adimari in Florence.

Just before his death (22 September 1607), Allori requested burial at the same church as Bronzino. Together, they were two of the last prominent Florentine masters with an undiluted Tuscan heritage stretching back to Fra Bartolomeo and Leonardo da Vinci.

If you love the skillful mastery of Agnolo Bronzino painting, explore our extensive collection of replica art and oil painting reproductions. Whatever art you enjoy, whether it’s famous Renaissance portraits, impressionist oil paintings, or contemporary abstraction, you’ll find museum quality oil paintings on canvas to enrich your life and your walls.