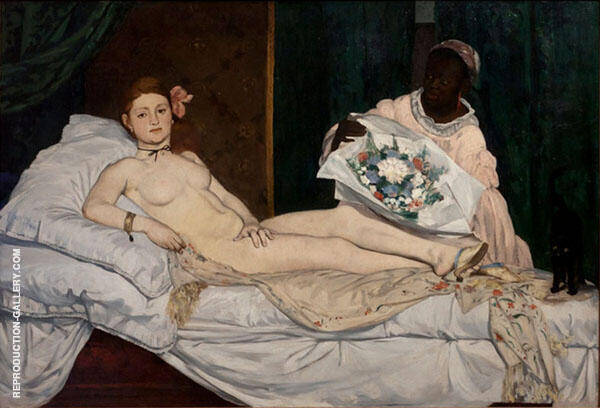 Olympia by Edouard Manet 1863 is one of the most admired yet controversial paintings of all time.

Depicting a nude woman (the Olympia of the title) reclining on a sumptuously furnished bed, it instigated equal amounts of shock and disbelief on its unveiling to the French public.

Manet's oil painting was first exhibited at the Paris Salon of 1865 and has since emerged as one of the most famous impressionist paintings.

Why did Manet paint Olympia?

Deviating from traditional academic style, quick brushstrokes, large areas of color, and flat depth characterize the painting. Manet’s Olympia is unmistakably a real woman in a natural setting, unlike recent heavily mythologized nudes, such as Alexandre Cabanel ‘s The Birth of Venus.

The maid offering the bunch of flowers was known as Laure. While the real woman’s last name remains unidentified, her inclusion in the painting is a topic of intense scholarly debate. Olympia was painted just fifteen years after the abolition of slavery in France when racist views were still strong in Paris.

Some argue Laure’s inclusion served as a negative counterpoint to the white woman, signifying racial stereotypes of the age. Others (such as Charles Bernheimer) posit Manet included the maid figure to develop the theory of chiaroscuro, with opposing light and dark tones.

The woman in Manet’s painting is Victorine Meurent, an established model and painter in her own right. Although known today as Manet’s chief muse, she also regularly exhibited at the Paris Salon. Indeed, in 1876 her paintings were selected for the juried Salon show, while Edouard Manet's artworks were not.

Why is Manet’s famous nude painting so controversial?

While assessing Edouard Manet’s Olympia, it is essential to note it wasn’t the woman’s nudity that scandalized the French public. Indeed, it wasn’t even the suggestions of her prostitution, the contrast between her fully-clothed assistant, or the issues of class and race inherent in the large painting. Instead, the woman’s intense, direct stare confounded contemporary audiences.

This lack of shame created a significant scandal. Various details in the painting present the woman as a “demimondaine,” a fact she doesn’t appear to be hiding.

Clues include the visible orchid tucked behind the woman’s ear, jewelry, and oriental shawl. In addition, the black ribbon choker and silk slipper further underlie the opulence and licentiousness. Charles Baudelaire also noted that Meurent’s thinness was particularly indecent.

Although Manet’s Le Déjeuner sur l’herbe (or “Luncheon on the Grass”) also generated extreme dissension on its debut in 1863, Olympia far surpassed this. “Vulgar” and “immoral” were just some words describing it in the press.

One of the few voices in support was Émile Zola. He praised Manet’s honesty and refusal to “correct nature.” Instead, he argued that Manet decided to “tell the truth” and depict the woman of the age, the “fille of our time.” This realism in subject matter and great painterly technique firmly place Olympia amongst the most famous realism paintings.

Where is the original famous Manet painting?

Purchased in 1890 by the French government, the painting currently hangs in the Musée d'Orsay.