All Artists
C
CABANEL, Alexandre
The Birth of Venus 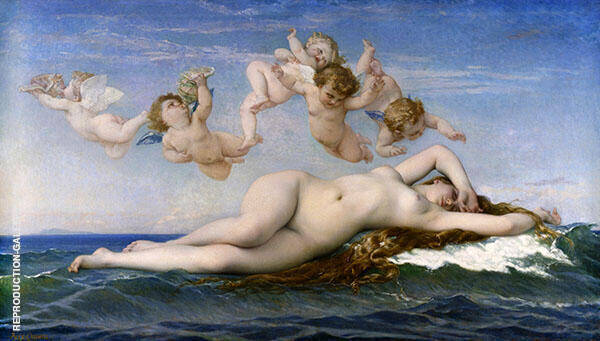 Alexandre Cabanel, The Birth of Venus (1863)

Alexandre Cabanel Birth of Venus is a work of unparalleled skill and beauty. It’s also one of the most famous paintings of nudes, renowned for its place in French art.

The painting represents a nude woman with flowing hair, languidly reclining on top of the sea’s waves. Five cherubs (or putti) fly overhead, heralding the arrival of Venus, Goddess of Love.

Is Birth of Venus academic art?

Also known as Naissance de Vénus, Cabanel’s Birth of Venus is a prime example of French Academic art. After the painting’s appearance at the Paris Salon, Napoleon III immediately bought the artwork. It became one of his prized possessions.

Cabanel taught at the prestigious Ecole des Beaux-Arts and helped organize the Paris Salon. Both organizations were bastions of French Academicism.

Birth of Venus paintings has a rich tradition in the history of art. Stretching back to Botticelli with The Birth of Venus (c. 1483), French Academic painters adored the theme.

Other famous Birth of Venus paintings include a beautiful 1879 artwork by William-Adolphe Bouguereau. The Hungarian artist Adolf Hiremy-Hirschl also produced a stormier and darker version in 1888.

What is the meaning of this famous nude painting by Alexander Cabanel?

Cabanel’s Birth of Venus represents a famous scene from Greek and Roman mythology. It depicts the moment the goddess Venus appears from the foamy waves.

The theme was intensely popular in the nineteenth century. It allowed artists to experiment with eroticism and female nudity without accusations of poor taste or offending public morals. While the pretext remained mythological, these nude paintings celebrate the female form.

Similarly, Cabanel poses his “Venus” in a sexually suggestive position. Describing the picture, Emile Zola wrote how the goddess “drowned in a sea of milk” resembled a “delicious courtesan.” He claims if she were “flesh and blood,” Cabanel would be indecent.

Instead, Zola describes how the woman appears like “pink and white marzipan.” With this observation, Zola hits on an essential Cabanel technique. This method included smooth brushwork, pale pastel colors, and a pearly sheen.

Interestingly, another of the most famous paintings of nudes appeared in 1863. This painting was Manet’s Olympia, which (unlike Cabanel’s Venus) caused a public scandal.

While both paintings brazenly depict a reclining nude, Cabanel’s calm academic assurance gives way to modern confrontation. In Manet’s image, the woman stares straight back at the viewer. She is no longer a classical nymph or goddess but simply a naked woman.

Birth of Venus paintings by Cabanel?

Cabanel (and artists working with Cabanel) produced three versions of The Birth of Venus. The first version (painted in 1863) hangs in the Musée d’Orsay in Paris.

After the success of his first creation, Cabanel sold the reproduction rights for the painting. Then, he worked alongside Adolphe Jourdan to oversee a second, smaller painting. While the original measured 150 centimeters by 250 centimeters, the second was just 85 by 135 centimeters.

This smaller painting currently resides in the Dahesh Museum of Art in New York. Intriguingly, this oil painting is now more famous than the original probably because it often appears in nineteenth-century art books and is usually attributed to Cabanel.

The third and final version (painted in 1875) hangs in the Metropolitan Museum, also based in New York.

In addition to The Birth of Venus, Alexandre Cabanel produced many famous paintings of nudes. They remain some of the 100 most famous paintings in the world, celebrated for their extreme beauty and skill.

If you love Alexandre Cabanel’s artwork, explore our extensive collection of museum-quality art reproductions. Enjoy discovering art reproductions of Birth of Venus paintings by famous artists other than Cabanel.

The Birth of Venus
By Alexandre Cabanel