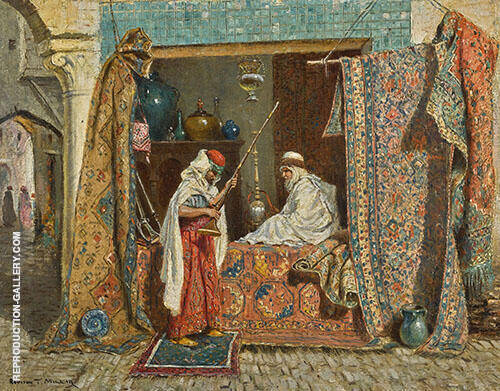 Millar was born in Ohio in 1860 and died as the result of a car accident in Connecticut in 1913.

A young Addison Thomas Millar started painting early and by the age of 9 he has already won several art competitions.
As a result of this early success, he was encouraged by his parents to take formal art lessons.
He later opened his own Studio specializing in portrait sketches and paintings.

During the early 1880's Millar trained in New York City with William Merritt Chase at the Shinnecock Summer School.

However, in 1894 Millar travelled to Paris.  Whilst in France he studied at the Academy Julian along with the Italian genre portrait artist, Giovanni Boldini.

The following year in 1895, Millar visited Spain.  From there he made his first visit to Algiers, a country which provided inspiration and source material for a large number of his subsequent oil paintings.

Some of his best known artworks are An Eastern Shop, Rue Koleher, Algeria and An Oriental Shop.

The Waterfall, an oil on canvas painting, completed in 1910, is held at the Smithsonian America Art Museum.

Oil paintings reproductions by Thomas Millar and other Orientalism artists Josep Tapiro Baro and Jean Leon Gerome can be enjoyed by visiting our online art catalogue.