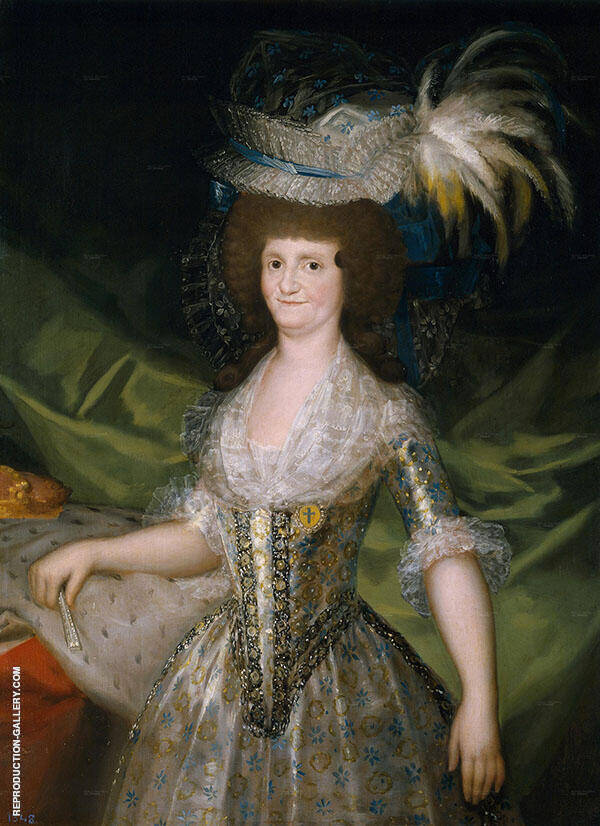 Goya was born into a lower middle class family and at aged 14 began to study painting, firstly in Aragon, and later in Madrid. Failing to win a Scholarship to the Royal Academy in Madrid, Goya funded a visit to Rome, where two of his earliest paintings Sacrifice to Vesta and a Sacrifice of Pan were completed.

In 1777 Goya returned to Madrid and won a commission to design a series of tapestries for the Royal Tapestry Factory. Over a five year period Goya designed some 42 patterns that were used to cover the stone walls of Spanish Royal palaces, such as El Escorial. Goya was commissioned to paint a portrait of the Count of Floridablanca in 1783. From that time on Goya became a Royal favorite and in 1790 he was appointed First Court Painter. Goya portraits were commissioned by many members of the Spanish Aristocracy. Goya portraits also include scenes of the Spanish Royal Family.

Goya’s best known portraits of Spanish nobility are The Count of Floridablanca, 1783, owned by the Bank of Spain in Madrid, The Family of Infante Don Luis 1784 owned by the Magnani-Rocca Foundation in Italy and The Marquesa de Pontejos 1786, owned by the National Gallery of Art in Washington DC.

Manuel Osorio Manrique de Zuniga 1788, and The Countess of Altamira and her Daughter 1788, are housed at the Metropolitan Museum of Art in New York.

Famous paintings by Francisco de Goya include The Parasol 1777, The Swing, 1779 and The Snowstorm 1786 all of which are held by the Prado Museum in Madrid.

Goya’s most famous painting, and the first life sized female nude portrait painting in Western art, is La Maja Desnuda. The painting was a commissioned by the Prime Minister of Spain, Manuel de Godoy, for his private collection and a second painting, this time with the same model fully clothed, La Maja Vestida – The Clothed Maja, 1805, was also commissioned. The two paintings sit happily together in The Prado Museum in Madrid. Both Goya Maja oil paintings are available as reproduction paintings on canvas from our online catalogue of replica oil paintings for sale.

Goya’s career changed when the French army invaded Spain in 1808, in the Peninsular War from 1808 – 1814. During this period Goya is known to have worked for the new French King Joseph, the brother of Napoleon, but Goya’s two best known paintings of the period were painted after the war: The Third of May, 1808 and The Second of May 1808 both reside in the Prado Museum in Madrid.

Goya painted a series of 14 paintings known as the Black Paintings, which were in fact murals painted in oils directly on to the walls of his farmhouse. Francisco Goya black paintings were completed from 1819 onwards after he suffered from an unknown illness that left him very weak and deaf. The most famous of these works are Saturn Devouring His Son The Dog, The Fates, Monk Talking to a Blind Woman c1824, and Witches Sabbath

After Goya’s death in Bordeaux in 1828, the murals were carefully cut from the walls and restored, and later donated to the Spanish Government. All fourteen murals, now transferred to canvas and wooden frames, are on display at the Prado Museum in Madrid.

Goya painted The Colossus in 1808-1812 also known as The Giant. Although this oil painting pre-dates Goya’s black paintings, it is clear that the technique references his art from that time.

Art reproductions on canvas are created entirely by hand by our resident professional artists and all of Goya’s Romanticism paintings are offered in a large choice of sizes.