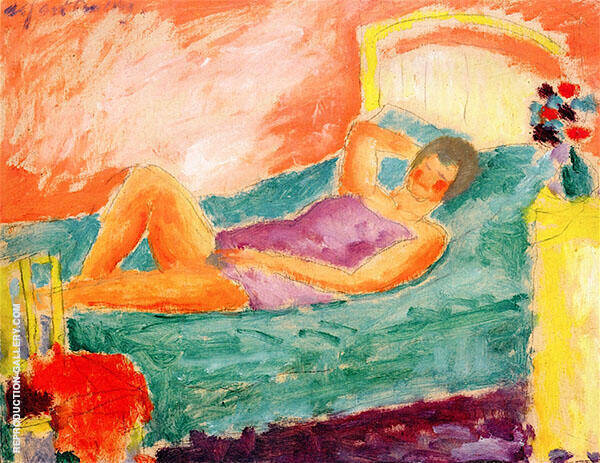 Alexej von Jawlensky is one of the most famous expressionist painters of the late nineteenth and early twentieth century. As a Russian painter working in Germany, he transformed the world of modern art.

Where is Jawlensky from?

Torzhok was famed for its tradition of folk art goldwork embroidery. With a proud artistic history, the young Alexej von Jawlensky soaked up the town’s creative focus.

The family moved to Moscow in 1874. Alexej initially enrolled in the military academy, but his love of art soon took over.

Visiting the Moscow World Exposition in 1880 enthralled the young man. Luckily, the family had friends in high places, and Alexej’s parents were subsequently able to secure introductions in St Petersburg.

Jawlensky commenced his studies at the St Petersburg academy. He did this simultaneously with his military duties – excelling in both.

While studying in St Petersburg, Jawlensky met Ilya Repin. Ilya Repin was one of the most famed Russian artists of the nineteenth century. His work was pivotal in the development of the Russian Realist style.

She was so impressed by Jawlensky’s work that she devoted her energies to promoting his art. Marianne von Werefkin also provided the young artist with living expenses and further social introductions.

In 1894, Jawlensky moved to Munich with Marianne von Werefkin. He continued his studies with Anton Ažbe.  Ažbe was a well-respected realist painter who trained the biggest names in impressionism and expressionism. His students included Wassily Kandinsky, famed for his Der Blaue Reiter paintings.

Deeply inspired by Wassily Kandinsky and his circle, Alexej von Jawlensky’s artistic career changed after this date. Alongside Kandinsky and Marianne von Werefkin (amongst others), he played a crucial role in forming Der Blaue Reiter group (the Blue Rider).

Together, the artists enjoyed spending summers in the Bavarian Alps. Accompanied by Gabriele Münter, they painted landscapes depicting their beautiful environment. In addition, the artists often discussed each other’s techniques and artistic goals, sharing their knowledge and approaches.

Alexej von Jawlensky artworks from this period include the Yellow Sound paintings of 1907 and 1908 and The Mountain. From these early works, it’s possible to see the foundations of the Der Blaue Reiter paintings.

Der Blaue Reiter group was short-lived, only lasting from 1911 to 1914. This small artistic community was incredibly influential, however.

Der Blaue Reiter oil paintings and artworks focused on freedom of expression. Each artist strove to express spiritual truth in their work. Vivid colors and expressive brushwork were common features.

With the First World War outbreak, Jawlensky moved back to Russia. Unfortunately, the war signaled the break-up of Der Blaue Reiter group. Franz Marc and Auguste Macke (two leading artists in the group) sadly died in active military service. The other artists spread all over Europe.

Jawlensky’s artworks developed considerably during the war years. He experimented with abstraction in works such as Variation When the Lark is Singing. Despite such experiments, Jawlensky returned to his love of depicting the human form. His expressionism paintings took shape during this period.

What are some Alexej von Jawlensky portraits?

It was during this period that Jawlensky created two of his most famous series of works. These were Mystical Heads (1917-19) and Saviour’s Faces (1918-20). These portraits harked back to Alexej von Jawlensky’s upbringing in the town of Torzhok. They reflected the town’s folk-art rituals, specifically the traditional Russian Orthodox religious icons familiar in the area.

After the First World War ended, Alexej von Jawlensky returned to Germany. He continued his tireless work on expressionism paintings and later settled in the town of Wiesbaden (Hesse).

Regarding his personal life, Alexej von Jawlensky married Hélène Nesnakomoff in 1922. They had a son together, Andreas, born in 1902.

Alexej von Jawlensky often painted Hélène. These subtle artworks displayed his deep love for her. They include works such as Helene in Red Waistcoat, Helene in Colored Turban, and Helene with Her Hair Down.

While living in Germany, Alexej von Jawlensky played a crucial role in forming the Blue Four. The group formed in 1924 consisted of Jawlensky, Wassily Kandinsky, Paul Klee, and Lyonel Feininger.

Galka Scheyer was instrumental in bringing the artists together and promoting their work across Germany and America.

When did Jawlensky die?

From 1929 onwards, Jawlensky struggled with arthritis. His health deteriorated, and he scaled back, creating his expressionist paintings. Jawlensky’s artistic output sadly came to an end in 1937.

Alexej von Jawlensky started dictating his life’s memoirs the following year. He remained in Wiesbaden for the rest of his life and died on 15 March 1941.

In a fitting tribute to the artist’s life and works, the “Jawlensky Award” commenced in 1991. This prestigious award is granted to a contemporary artist once every five years. It’s supported by Wiesbaden and Hesse and is also accompanied by an exhibition at the Museum Wiesbaden.