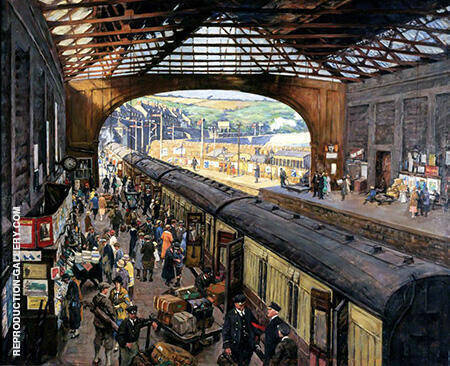 Buy art reproductions on canvas of Stanhope Alexander Forbes paintings A Fish Sale on a Cornish Beach 1884 which depicts the local fish auction at Newlyn and A Street in Brittany 1881 which portrays Breton women knitting in the street at Cancale. Both paintings were exhibited at Royal Academy Summer Exhibitions.

Stanhope Forbes painting Old Newlyn 1884 is just one of his famous oil paintings on canvas which was sold by Sotheby’s in 1992.

Do you like Newlyn School paintings by Stanhope Forbes or do you enjoy reproductions of famous paintings celebrating the beauty of the Cornish Coastline? Enjoy browsing replica paintings from both Stanhope Forbes and his wife Elizabeth Forbes.