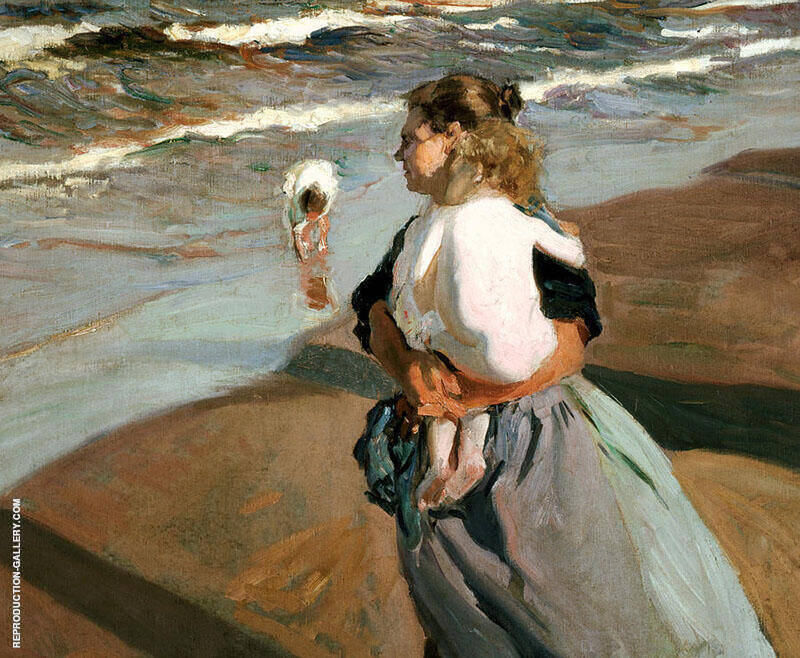 Joaquin Sorolla paintings exemplify Spanish art at its best; he painted portraits and landscapes under the bright Spanish sunlight and he is known as the “Spanish Master of Light”.  He was a prolific artist and it is estimated that there are around 3,000 paintings and many more sketches and drawings.

Sorolla’s art is associated with the Impressionist Movement, Luminism and Modern Art of the early 20th Century.

John Singer Sargent and Anders Zorn were both his contemporaries and Joaquin Sorolla’s artworks were often exhibited alongside theirs.

Born Joaquin Sorolla y Bastida in Valencia in 1863, he was orphaned at the age of two, when both of his parents died from cholera.  He was raised by his maternal aunt and uncle who encouraged his interest in painting and at aged 15 he was enrolled at the Academy of San Carlos.

Sorolla studied at the Fine Arts School of San Carlos.  From there he won a scholarship to study in Rome.  He later went to Paris, and then worked in Europe and in America, painting a portrait of President Taft in the White House.

Sorolla exhibited his paintings at the St Louis Art Museum and the Art Institute of Chicago, with 161 of his canvases being displayed.

Sorolla became a member of The Hispanic Society of America in New York, where he exhibited in 1909.  Nearly 200 of the 350 paintings on display were sold.

Sorollo’s most famous paintings are a series of 14 gigantic murals, of 12 to 14 feet in height and a total of 227 feet long, displayed in the Hispanic Society of America building in Manhattan, where they can still be seen today.

Joaquin Sorolla’s artworks are widely collected and in 1933 J Paul Getty purchased 10 of his paintings which can be seen at the Getty Museum in Los Angeles.

Sorolla’s famous paintings include The Horse’s Bath 1909; a large oil on canvas currently housed at the Sorolla Museum in Madrid.

After Bathing 1915, is a perfect example from Joaquin Sorolla “Painter of Light” which again can be viewed at the Sorolla Museum.

Two of our most popular oil painting reproductions, which were both painted in 1909, are Strolling along the Seashore (also known as Women Walking on the Beach, and Two Sisters of Valencia which is retained by the Art Institute of Chicago.

In 2008, The Three Sails by Joaquin Sorolla was sold by Sotheby’s to an undisclosed buyer for over $4.5m.

Sorolla was married to Clotide Garcia del Castillo with whom he had three children. In 1920, at the age of 57, he suffered from a stroke which left him paralyzed.

The Little Granddaugher
By Joaquin Sorolla