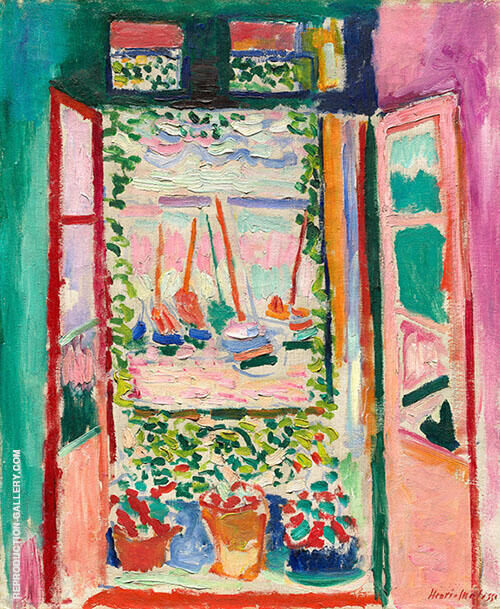 Known as the Open Window, Collioure, this Matisse artwork is a stunning example of color and creativity. It stands out for its beauty and joy even among famous Matisse paintings.

Why did Matisse paint The Open Window?

He notably painted window scenes in Nice and Etretat, with works such as Seated Woman Back Turned to the Open Window (1922). In addition, Matisse returned to the theme in later life. Even in the late 1940s, he created window paintings such as Red Interior, Still Life on a Blue Table (1948).

The Open Window shows the view from Matisse’s apartment in Collioure. It was a picturesque small town on the French south coast. Matisse loved visiting this spot and traveled there alongside the painter André Derain.

In the painting, sailboats appear from the two French doors, gently bobbing on the water. Matisse’s potted plants dominate the lower foreground while the hazy, sun-filled sky dances with lilacs and pinks.

Painted from inside Matisse’s hotel apartment, it gives a fascinating insight into Matisse’s way of seeing the world.

What does The Open Window mean in art?

Windows have fascinated artists across the centuries. When closed, they can stand for dark emotions and entrapment. When open, they can show deep desires, hope for the future, and a step into the unknown.

One of Matisse’s most abstract and enigmatic works, French Window at Collioure (1914), also depicts an open window. However, this painting shows a black, dark scene beyond.

In addition to their symbolic meaning, windows allowed Matisse to focus on particular scenes and views.

What style of painting is The Open Window?

With The Open Window, Matisse experiments with Fauvism.

Matisse later became famous for his Fauvist creations. He also led a group of Fauvist artists from 1900 to 1909. This movement included leading painters such as Georges Braque, Maurice de Vlaminck, and André Derain.

Nonetheless, this is no “simple” artwork. Matisse avoids traditional painterly techniques such as chiaroscuro (opposing light and dark tones), instead dividing the painting into zones of contrasting bright colors.

The painting also uses a wide variety of brushstrokes. These brushstrokes include long blended marks as well as quick, dappled touches. As a result, each area of the room appears in a distinctive style. For instance, softly mixed color adorns the walls and doors, while dotted marks create the plants surrounding the window’s exterior.

What are the main characteristics of Fauvism paintings?

The main characteristics of Fauvism paintings include:

Fauvism is particularly evident in many famous Matisse paintings. These works include pictures such as The Woman with a Hat (1905) and The Dance (1910). The Open Window is also a Fauvist creation.

Where is The Open Window by Matisse?

The Open Window Matisse hangs in the National Gallery of Art in Washington D.C., USA. It measures 55.3 by 46 centimeters.

The painting is part of the Whitney Collection at the museum. This uniquely important collection includes other famous images such as Vincent van Gogh’s 1889 Self-Portrait, The Port of La Ciotat by Georges Braque, and Marcelle Lender Dancing the Bolero by Henri de Toulouse-Lautrec.

Today, The Open Window is one of the 100 most famous paintings in the world. For this reason, it’s still one of our most popular famous painting replicas. As an iconic modern art oil painting, this bright and joyful painting is a small yet dynamic work that truly stands the test of time.